We recently had the pleasure of working in the historic area of Edgefield in Nashville, TN. A fan of JVI Secret Gardens on Facebook, the homeowner followed our page, liked our look, and decided to give us a call. We were more than happy to answer! 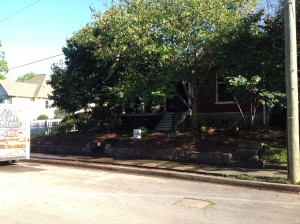 The client recently re-painted her house and trimmed back some very old holly plants in front. She was also eager to get rid of some existing ground cover and replace with plants that would flourish in the space to enrich the curb appeal of her home.

In order to start with a clean slate, we began the project by tearing out any plants the client didn’t want – ground cover and the rest of the existing hollies. Then we brought in a varied selection of shade perennials that we knew would fill in – as well as thrive in – the space and laid out the plant material in a suggested fashion to let the homeowner give final approval before planting. After a couple of small edits from the client, the plant layout was finalized and we moved to the next step – the front yard water feature!

For this job, we luckily had the pleasure of installing an Aquascape Spillway Bowl, a recently-released Aquascape water feature that we also have at our garden center. These features are low-maintenance, especially when coupled with the optional dosing system to prevent algae, and are easy to install, which makes the sound of falling water even more soothing! To put icing on the project, we installed 10 landscape lights to illuminate the new water feature and existing trees. Then we completed this phase of the project with a layer of pine straw for a cohesive landscape.

We made sure to keep the homeowner involved with daily updates on the progress via phone calls, text messages, and emails to accommodate the client’s busy lifestyle. She made sure to tell us that she very much appreciated these reports as they let her know exactly what was being done to her home, including a timeline and cost rundown for each step.

A few challenges presented themselves with this project, including a small space inhibiting room for our machines and a hard day’s rain, but we finished the front yard in 5 days for right at $10,000.

In phase two of this project, we completely re-imagined the client’s backyard. Read the story here.